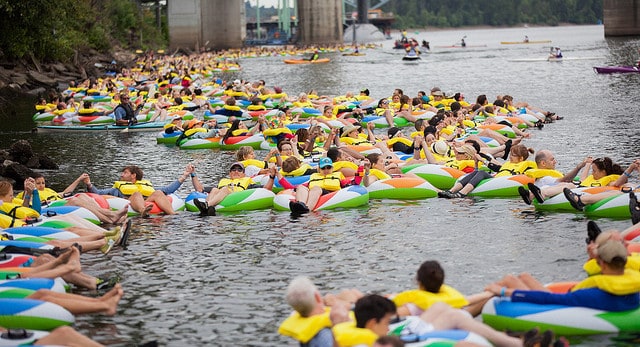 While in Portland for World Domination Summit, I had the opportunity to participate in my first ever Guinness World Record attempt. Let’s be honest, how else would you think to start a summit on world domination?

The record was for … ready for it … the longest floating human chain.

620 people got up early in the morning, headed down to the Willamette River with our inner tubes, and hopped in the slightly chilly water to attempt the record. We were all taxied out a ways from shore by jet skis and kayakers and floated around until everyone was out. The chain was over 1/2 mile long! Once we were given the command, we all held hands for a solid 5 minutes to break the record.

And guess what…WE DID IT, blowing the previous record out of the water! It just proves what can be accomplished when enough people come together with a common goal in mind. Check out a video of the event below.